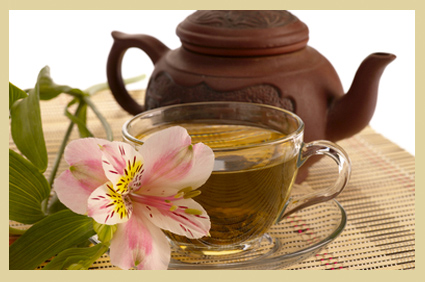 Green tea is made from the leaves from Camellia sinensis that have undergone minimal oxidation during processing. Green tea originated in China, but it has become associated with many cultures throughout Asia. Green tea has recently become more widespread in the West, where black tea has been the traditionally consumed tea. Green tea has become the raw material for extracts which are used in various beverages, health foods, dietary supplements, and cosmetic items. Many varieties of green tea have been created in the countries where it is grown. Over the last few decades green tea has been subjected to many scientific and medical studies to determine the extent of its long-purported health benefits, with some evidence suggesting that regular green tea drinkers may have a lower risk of developing heart disease and certain types of cancer. Although green tea does not raise the metabolic rate enough to produce immediate weight loss, a green tea extract containing polyphenols and caffeine has been shown to induce thermogenesis and stimulate fat oxidation, boosting the metabolic rate 4% without increasing the heart rate.