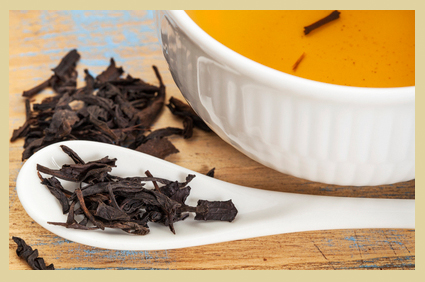 Oolong Tea is produced through a unique process including withering under the strong sun and oxidation before curling and twisting. Most oolong teas, especially those of fine quality, involve unique tea plant cultivars that are exclusively used for particular varieties. The degree of oxidation can range from 8 to 85%, depending on the variety and production style. Oolong is especially popular with tea connoisseurs of south China and Chinese expatriates in Southeast Asia, as is the Fujian preparation process known as the Gongfu tea ceremony. In Chinese tea culture, semi-oxidised oolong teas are collectively grouped as qīngchá. The taste of oolong ranges hugely amongst various subvarieties. It can be sweet and fruity with honey aromas, or woody and thick with roasted aromas, or green and fresh with bouquet aromas, all depending on the horticulture and style of production. Several subvarieties of oolong, including those produced in the Wuyi Mountains of northern Fujian, such as Da Hong Pao, are among the most famous Chinese teas. Different varieties of oolong are processed differently, but the leaves are formed into one of two distinct styles. Some are rolled into long curly leaves, while others are ‘wrap-curled’ into small beads, each with a tail. The former style is the more traditional of the two in China.